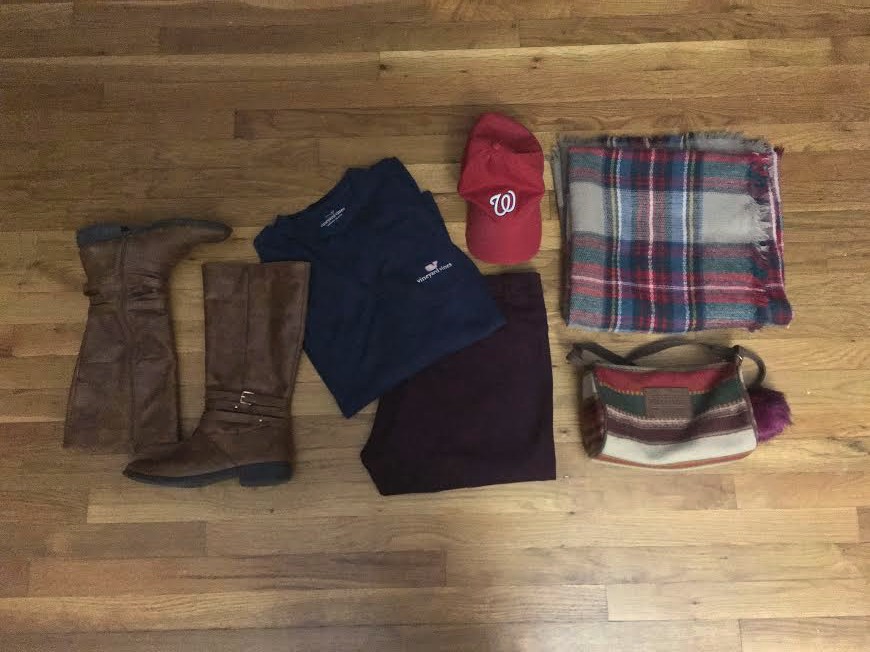 HAPPY HUMP DAY! We’re almost there, folks. The weekend is so close; I can taste it. So okay, this post was originally supposed to be How to Dress for the Buffet, but then my mother dropped a big-ole truth bomb on me. My aunt had a luncheon on Sunday and invited everyone three weeks ago. My mother let me know the day of because that’s just what Bengali mothers do.I already made plans to go to the Korean BBQ buffet. I was looking forward to it for days and nothing was going to stop me, not even a luncheon at my aunt’s house. I was young, motivated, and in control. I had a whole schedule of a day planned and I had to make sure I looked appropriate for the occasion.

My pants were a hybrid of jeans and leggings (jeggings). The pants are from Ann Taylor. After stuffing my face with kimchi, I didn’t feel restricted as I would if I wore denim. I wore a long sleeve shirt from Vineyard Vines because it’s covers all of my insecurities and shame about going to lunch before going to my aunt’s luncheon. On top of that, I wrapped my plaid blanket scarf in place of a jacket because after eating so much food, I didn’t need anything to weigh me down. I bought the scarf off of Amazon. I saw the same scarf at South Moon Under for $40 and immediately said no thank you. The scarf was $7 on Amazon when I bought it. I think it’s a little higher now. My purse is from Pendleton. It’s small enough to carry all of my important things and is a fun splash of pattern. Whoever said you can’t pattern on pattern is seriously disturbed. I added the National’s hat because #dcprideallday and I haven’t washed my hair in days. The shoes are probably the most important part about this outfit and it’s not only because I believe in shoes. You have to make sure the the soles of your shoes are non-slip. I, once, wore 3 inch wedges to the buffet (my friends and I made plans to eat there after I got in the car). There was water on the ground and I’m sure you guys can imagine what happened next. I picked riding boots because it actually made the outfit come together nicely and the soles would keep me grounded. The boots are from Payless. Fun Fact: Riding boots designed for Payless are designed by the same designers for Steve Madden.

So when I got to my aunt’s party, I felt like death the entire time. There was so much food at her house. I was overwhelmed and overstimulated. Everyone was socializing and I sneaked away to my cousin’s room to take a nap. I know; I know. This wasn’t my smartest idea, but hey I did it! Even though I was feeling sick, this just goes to show you that you can have it all. You should never let anything stop you, especially when it comes to Korean BBQ.

Thank you all for reading. I love you all so much!

We did what all girls do in the weekend: brunch, lay on beds at @westelm & browse @barnesandnoble #brunchbedbooka #bbb #bitcheswhobrunch
Goodbye Rosslyn! It’s been real 👽 #g2g #clawislaw
As my last week at Carr is coming to an end, will I find another bathroom to take selfies in again? #lebigsigh #firstworldproblems #selfietime #pouty
Happy Birthday, @tay2xtimes ❤️ #HEADSPRUNG #saulneedsonstagram
Thank you everyone for coming! My heart and stomach are full. Feeling super grateful. I have awesome friends. 💕🦋 #twentynine
Jesus, I’m just trying to be grateful on social media but the world doesn’t want me to be happy. 28 was good. 29 should be fun! Also, fuck copyright laws. I tried to post this 13 billion times. Also, let’s create more memories together bc I love u! 💕🦋